What is Power Factor Correction?

Power factor correction (PFC) is the process of raising the electrical systems power factor (PF) to a target level, typically 95%. If you’re not sure what PF is, please read our article “What is Power Factor”.

PFC can be achieved through different methods but the most economical method is to use PFC banks. This type of traditional PFC makes use of power capacitors to add capacitive or leading kVAR to the system to offset the inductive or lagging kVAR typically produced by induction motors. For example, a system with 300 inductive kVAR can be corrected to unity PF by adding 300 capacitive kVAR.

With the advancement of transistor-controlled power, newer methods of PFC can achieve tighter control of system PF. These range from thyristor switching of capacitor steps, to static VAR generators (SVG), static VAR compensators (SVC), and static synchronous compensators (STATCOM). All these methods have faster and more accurate response to changing system PF, and are typically quite expensive compared to the capacitor method. 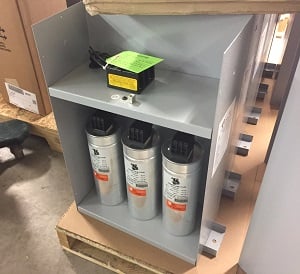 Compensation on the load side of the AC motor starter (motor switched or “at the load”). A good application for essential or constant loads over 40HP.

Compensation for electrical systems with fluctuating loads. Usually installed at the main power distribution (service entrance). The capacitors are controlled by a microprocessor-based relay which continuously monitors the reactive power requirements. The relay then connects or disconnects capacitors to supply capacitance as needed.

What is the ROI of power factor correction?